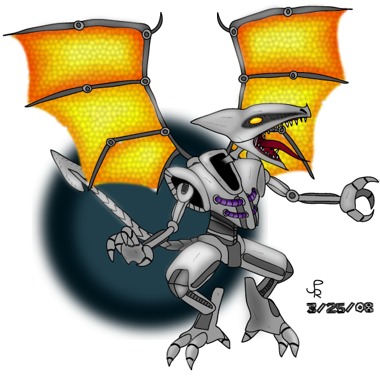 SKILLS AND ATTACKS: Same as ridley

STRENGTHS: YOu only have 2 minutes to fight him and he's very strong.

BACKGROUND: After his defeat at the hands of bounty hunter Samus Aran, Ridley was left in critical condition, with most of his life systems failing. Space pirate scientist worked around the clock and came up with a solution. They outfitted Ridley with cybernetic implants and armor to replace his failing biological components. This brought him back from the verge of death, but wielded no true enhancements to his performance.
Samus originally encountered this beast on Tallon IV where the Space Pirates turned Ridley into the cyborg beast we know and love(sort of).

EVOLUTION: In Metroid Prime, Meta Ridley looks much like he does in Brawl: Normal Ridley with metal on his body. In MP3: Corruption, Ridley was completely in metal, though that metal seems to have integrated with his skin, giving him a blue color.