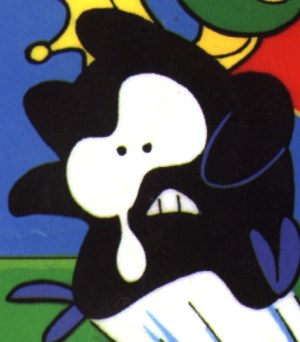 STRENGTHS: They're good at jumping.

BACKGROUND: Ninjis first appeared in Super Mario Bros. 2. Since then they have not appeared in many other Mario adventures. This could be because they can be very rowdy and difficult to control (though in PM, they worked very cooperatively in Starborn Valley).
These small, dark creatures Prefer to live in areas with lots of room, they are most commonly found in plains, mountains or vast caverns. Used by Wart and Bowser for their speed and jumping capabilities, Ninjis can be very difficult to attack.