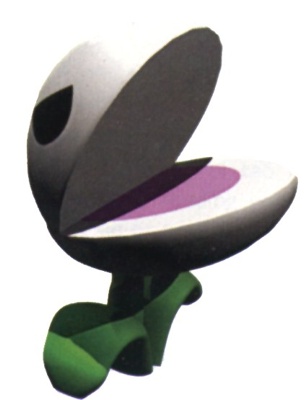 STRENGTHS: They often appear in teams.

BACKGROUND: These creatures come with three different names. They are commonly known as Nipper Plants, and also go by the name Chompweed: These are both slang-names. The proper name for these plants is Walking Piranhas as they are closely related to Piranha plants (although they don't look it). However, we go by Nipper Plant here, as it is the most commonly-used name.
Nippers are common pests around the Mushroom Kingdom, and they can adapt to just about any type of environment. They're known to eat other plants (and just about anything else) growing in the area, and the fact that they are mobile makes them even worse.
They are somewhat dangerous, because of their bite, but can be destroyed easily with fire, or the right gardening tools. Nipper Plants are wild, but Bowser has been known to breed them as troops.

EVOLUTION: The evolution of Nipper Plants is only mildly interesting. They first apperead in Super Mario Bros.3 as small, white plants that could hop around. They returned in Super Mario World 2, with one minor difference: they had lost their eyes. Also at this time, Nipper spores were discovered. These seeds float through the air, and grow into Nippers wherever they land.
The eyes returned in Super Mario RPG, and then disappeared again in Yoshi's Story. Some scientists have argued that there may be two separate species - one with eyes and one without.
Graphically speaking, I think the SMB3 and SMW2 Nippers are the best-looking...they resemble their drawn counterparts quite well.
They've returned in some recent games including Super Princess Peach.