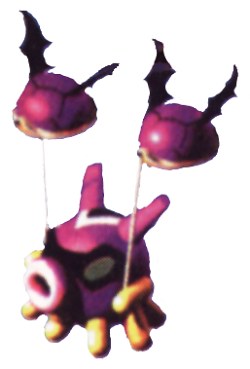 BACKGROUND: Like their cousins, Octolots, Octovaders are believed to be alien creatures used by Smithy to invade the Mushroom World. These monsters are adept at herding and taming other life-forms, so many researchers believe Smithy employed them to take control of native wildlife on the planets he invaded and use them to control rebellions. In the Mushroom World, they worked with a variety of monsters to slow down Mario and his friends.
Octovaders are purple Octopus-like creatures which carry two turtle shells with bat wings on them. The purpose of these shells is unclear: one theory is that they are magic talismans used to focus energy into special attacks. Octovaders are not very dangerous on their own, but they almost always appear with other monsters. They are more powerful but also a bit slower than Octolots.