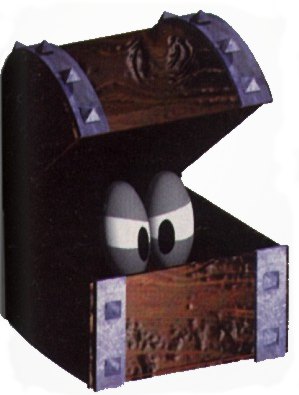 STRENGTHS: All special attacks but jump are weak against him.

WEAKNESSES: He can be badly injured by repeated stomping.

BACKGROUND: Pandorites are ghosts that have cleverly hidden themselves in treasure chests. They are impossible to tell apart from regular chests until they are opened. This special trick makes them slightly smarter than the average monster.
Pandorites are quite powerful and dangerous, but like real treasure boxes, they usually guard something fairly valuable. A prepared adventurer will almost certainly reap great benefits by tackling these.
Incidentally, while the reference is quite well-known, some of you may not be familiar with the origin of Pandorite's name. Pandora was the first woman ever created (according to Greek legends), and she was enticed by a shiny box. When she opened it out came all sorts of evil things like greed and war and whatnot. Not very nice at all. Similarly, the Pandorite is a box that looks good, but contains evil.