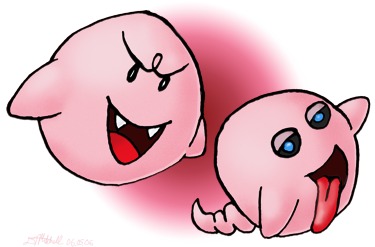 STRENGTHS: The ability to steal.

BACKGROUND: Mario was constantly holding Mario Parties and Boos always starred in mini-games, but were not playable. Finally, Mario invited Boo to Mario's Fifth Party! All the other Boos were happy, but realized that if they starred in the mini-games, the player Boo will get confused and mixed up with the crowd. To prevent this, they decided to make themselves pink, like the ones commonly found in Isle Delfino and the rare ones in Mario's Fourth Party. There are also Mini Pink Boos as well as a Big Pink Boo who will steal coins or a star for you if you visit him at night in Towering Treetop or Castaway Bay.

EVOLUTION: Pink Boos in Super Mario Sunshine looked just like the normal boos, but pink. They were small with dopey faces and tongues hanging out and were not transparent. In the Mario Party Series, they are not transparent (with the exception of some of the Big Pink Boos) and had bodies the size of Mario's head.