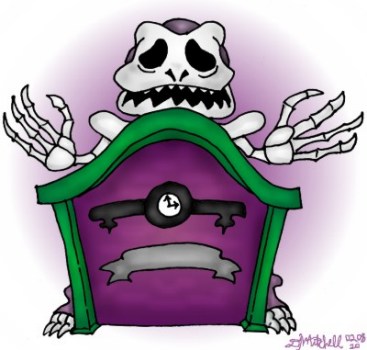 BACKGROUND: Reachers are the skeletons of the crew that went down with the ship now inhabited by Jonathan Jones. They are enchanted by the spirits of their former selves, and they hold on to their treasure with an iron grip, keeping it safe from thieves, even in death.
Reachers are mostly white, with dark grey-purple skulls. They can reach out and attack enemies from long distances with their long arms, hence the name "Reacher". These nasty creatures are very difficult to fight unless you are an experienced magic-user, so travelers should try to steer clear of them. The monsters don't seem to work for Jonathan Jones or King Kalamari, but they don't bother their new shipmates either.