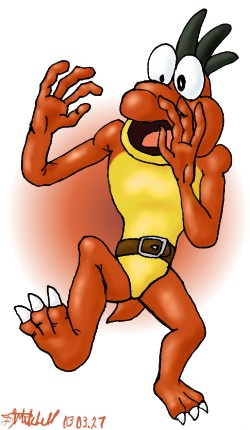 BACKGROUND: Ribbite is a distant relative of the Frogog, adapted to living in arid regions like Land's End. Like Frogogs, these amphibians can live outside of water for long periods of time, but they do require some moisture to survive, so they are normally found in caves where water collects.
Ribbites are not very dangerous but they can put unsuspecting opponents to sleep; if they are attacking with other monsters this can put a party of adventurers at risk. These monsters are wild, but Smithy may have forced them to enter an alliance with him, as they are seen cooperating with the Beezos (or Shy Aways) in some places.