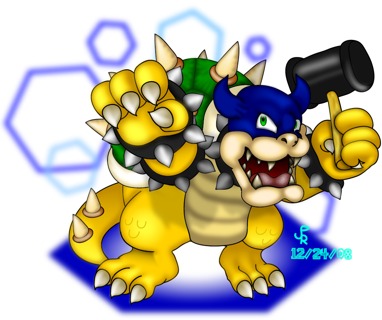 STRENGTHS: He will attack you with hammers if you attack Popple.

BACKGROUND: When Bowser was shot out of Tolstar's Cannon, he lost his memory and Popple found him on Hoohoo Mountain. Popple's took Bowser under his wing and dubbed him "Rookie". When they first met the Mario Bros, Rookie said they seemed familiar. But all he knew was that they mad him angry. He and Popple tried to steal the Chuckola Reserve and failed.
Later, the pair met the Mario Bros. again and failed to defeat them and the Beanstar that they were trying to steal flew away. Bowser remembered his identity but was knocked out and left in Stardust fields where Cackletta took his body over and became Bowletta. Bowser returned to normal after the Mario Bros defeated Bowletta.