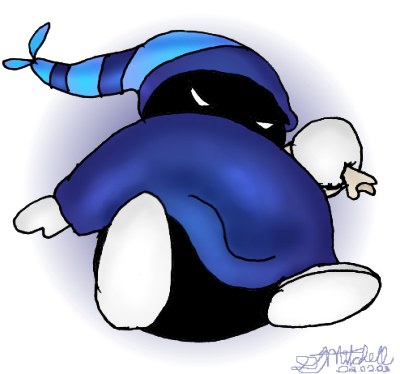 STRENGTHS: They're hard to catch because they move so fast.

BACKGROUND: These larcenous villains tend to wander around Star Hill, and they sometimes travel to Rose Town to steal things from the people living there. They are the second arm of a band of villains which includes Crooks, and rumour has it that they are rivals with the infamous 8-bits Club.
Sackits can be identified by their dark blue costumes and dark faces. They usually carry sacks over their backs. They tend to use hit-and-run tactics, stealing valuables from travellers and then retreating. If they do choose to fight, they shouldn't pose too much of a challenge for armed travellers, although they do have some nasty attacks.