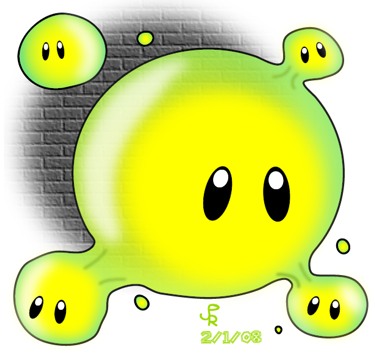 STRENGTHS: He can't hurt you, but his smaller Lemon Drops can.

WEAKNESSES: Anything thrown at him will hurt him.

BACKGROUND: Salvo was just a normal Lemon Drop until Kamek made him huge. However he was still weak due to the fact that he shrunk every time he was hit. Salvo shrunk until he disappeared.
Salvo later reappeared in other castles and disguised himself as a block. This time, however, he didn't break into smaller Lemon Drops. Salvo now hangs out in a hot spring and allows the Yoshis to use it.