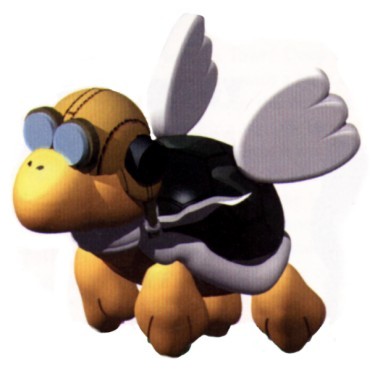 BACKGROUND: Sergeant Flutter is a rare black-shelled Koopa Paratroopa who leads a band of Paratroopas living in Monstro Town. Flutter is old-fashioned and very serious about discipline: his squadron spends several hours doing flight exercises each day and Flutter himself wears a traditional flying cap with goggles and a scarf that Monstermama knit for him.
Bowser made note of Sergeant Flutter's dedication to training his Paratroopas to be the best of the best. After defeating Smithy and rebuilding his castle, Bowser returned to Monstro Town to ask Sergeant Flutter to join the Koopa Troop but the loyal and stubborn Paratroopa refused to leave his home.