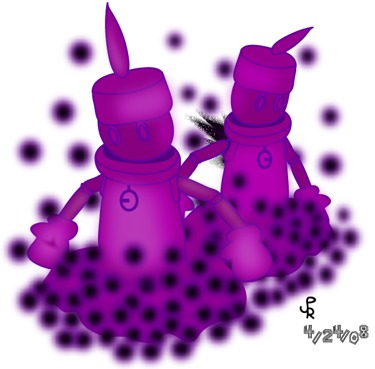 SKILLS AND ATTACKS: They make up the entire subspace army. They can also collect data from a trophy and clone the character.

STRENGTHS: They cannot be defeated.

WEAKNESSES: Many of the enemies are weak.

BACKGROUND: Shadow bugs are a strange swarm of entities. They appear to be mere specks of purple dust when they are actually the back bone of the Subspace Army. They come from the DNA of Mr. Game and Watch, and were extracted endlessly by Tabuu. The insects can form any foe in the Subspace Emissary, and even transform into dark clones of the main characters.
Shadow bugs could no longer be generated after the trophyfied Mr. Game and Watch was found inside Duon and restored. Enemies can be seen in glass display cases in the Halberd's interior. It is thought that perhaps these are the only real versions of those creatures that exist, and all the ones you fight are merely shadow bugs.