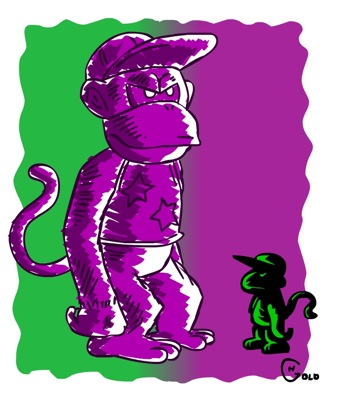 STRENGTHS: The first one is GIGANTIC.

WEAKNESSES: The second one is light.

BACKGROUND: Shadow bugs copied Diddy Kongs form in order to stop the gang of fighters he started up with Falco and Fox. Due to the immense number of Shadow Bugs that swarmed him, they all formed into one Diddy Kong that was 10 times as big as the normal one. After an exhausting battle, our three furry friends defeated the fiend and flew off to the rescue of Donkey Kong. Later, a normal sized clone of Diddy Kong appeared in the Great Maze. Compared to the first, it was a piece of cake.