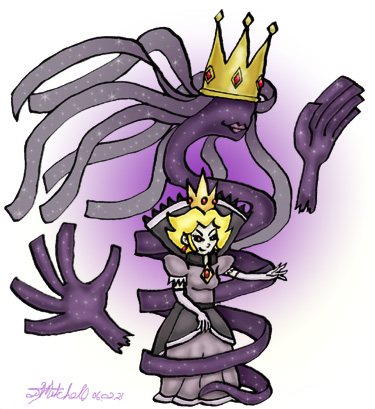 STRENGTHS: Her high health and ability to absorb health.

WEAKNESSES: She has no body.

BACKGROUND: There was once an Ancient Demon who, with 3 pet dragons, destoyed an ancient civilization and threatened to engulf the world in darkness forever. The Demon created seven Crystal Stars to help itself, but 4 Heros used these stars against the Demon and sealed it away beneath what is now Rogueport, behind a door. If this demon was ever to live again, it would need a new body, the body of a maiden. The Heros became cursed after defeating the entity. They went to scatter and hide the Crystal Stars, but the second the Crystal Stars left their grasp, the Hero would be sealed into a black chest for eternity.
A Thousand Years later, people whispered legends of a great treasure buried beneath the town, behind a Thousand Year Door which opened when all seven Crystal Stars were presented before it. However, an evil syndicate plans to open this door, for they know what truly lies behind it...