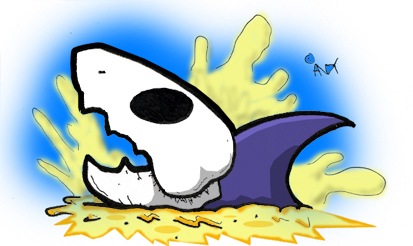 STRENGTHS: You can only see the fin at first, making it good for sneak attacks.

BACKGROUND: In the game, the name of this enemy is ????, or, basically, unknown, since they tend to swim through the sand with schools of Cheep-Cheeps. However, they're also known as Sharkbones. If you perform the advance Chopper Bros, you'll see that it is actually a shark skeleton with a fleshy fin on top. Otherwise, you only see a fin. These sharks usually attack in groups of three or four. In battle, they will move towards a character then pop up and bite them. If not, then a small Cheep Cheep will leap out of the ground over your head. These sharks are ancient creatures, and they have a surprising amount of battle knowledge.