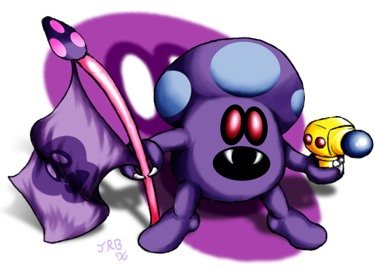 STRENGTHS: They come in large numbers and have the strength of UFOs.

WEAKNESSES: They don't know who they're dealing with.

BACKGROUND: The Shroobs invaded the Mushroom Kingdom when Princess Peach and the Mario Brothers were still babies.
They took the Mushroom Kingdom by storm, conquering Peach’s castle rather quickly and terrorizing other local spots. They assaulted Mario and Luigi, who arrived from the Mushroom Kingdom of the future, in Hollijolli Village. When they captured Toads, they used the trees of Toadwood Forest to sap all the Vim (Toad energy) and send it through underground pipes to the Vim Factory. In the Vim factory, it was mixed with other fluids and converted into energy for their flying saucers by a giant Swiggler. Precisely what Vim is is unknown. They seemingly have the technology to turn both Toads and Koopas into Poison Mushrooms, though the mushrooms are still capable of speech.
Shroobs are thought to be capable of close-range combat, but they tend to rely on devices such as ray guns to attack. Shrooboids are like Shroobs, but are a sub-species that are much more physical then their relatives. Also, there are no quotes as such as the speech of Shroobs is in Shroobish, which currently has no English translation. Shroobs also developed single-seater UFOs that are very versatile, and move much faster then the Shroob Mothership, although they have less firepower.