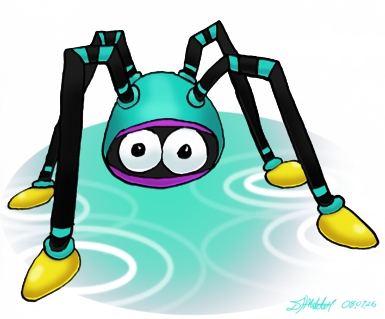 BACKGROUND: Skeeters are bugs that swim on the surface the water, similar to water striders. They have four skinny legs, small bodies, and bulbous suction cup-like feet. To move, it leans on its forelegs and scoots forward with a flick of its hind legs.

EVOLUTION: Skeeters have come in many different varieties. In Super Mario 64, they had green round bodies, black legs, marigold-colored feet, and an antenna. In Super Mario Sunshine they lost the antenna and were colored blue. Their feet also looked less like suction cups more like iceskates, which could be why they were called Pondskaters.
In New Super Mario Bros. Skeeters changed drastically: Their bodies became red and about EIGHT times fatter! They were like plump hockey pucks resting on skinny black legs. Here Skeeters could drop depth charges into the water, which would plow right through otherwise-indestructible wooden blocks. Like the original, this type of Skeeter has an antenna, but it's capped with a blue bulb instead of red.