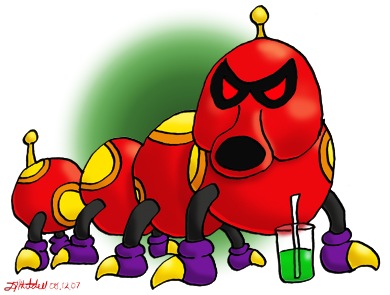 STRENGTHS: It has a drink that when it drinks to power up Shroob UFOs.

WEAKNESSES: The drink can be poisoned.

BACKGROUND: Swiggler was calmly sipping its vim mixture when Mario, Luigi and the babies walked through the door. They saw that Swiggler powered the Shoob space ships by drinking a vim mixture and filling the space ships with the mixture. Unfortunately for Mario and Luigi, Baby Mario swung his hammer and knocked over Swiggler's drink. This angered Swiggler and he started a fight with the Bros. - they eventually won the fight and got a blue shard.
Judging by it's caterpillar-like appearance, Swiggler was probably a Wiggler infected by Shroob spores. It hasn't been seen since.