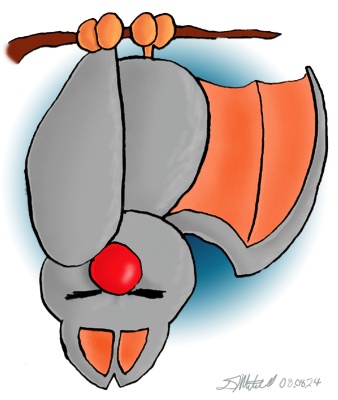 STRENGTHS: It stands up-side-down on the roof, so you cannot reach it.

BACKGROUND: Swoopula lives in caves and dark castles. It sleeps up-side-down on the roof and it has a little alarm in its head that tells it when danger is close, even when it sleeps. Otherwise it searches for blood, but only blood from humans and mammals. Just like a real bat it is a mammal itself, but a Swoopula never sucks blood from another Swoopula.
This is how it came too the Mushroom World: The Swoopula lived in a big cave a long time ago, but one day it wasn't enough space left! Then some Swoopulas heard that it was a cave in the Mushroom World too, so a group of fifty Swoopulas went to a portal to the Mushroom World. Thay went to the place where the cave was, but...there was no cave there! They begun to fly back to the portal, but it was gone. So they stayed and built families. Some off them flew to investigate the new world. A Swoopula can live for many years!