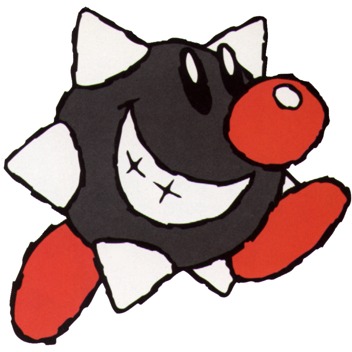 STRENGTHS: He can jump high.

BACKGROUND: Tap-Tap was a normal spiked enemy who was the greatest of them all. The Koopas built him a castle in his pride. One day Kamek made hin huge, hoping to destroy Yoshi before he reached Bowser. Tap-Tap was burned in lava and turned golden. He chased Yoshi, but failed once again to defeat him. Yet the Yoshis were nice to him. They painted him gray again and he was crowned King of Tap-Taps. They now honor him. He is called "Tap-Tap the Red Nose" because of his large red nose.