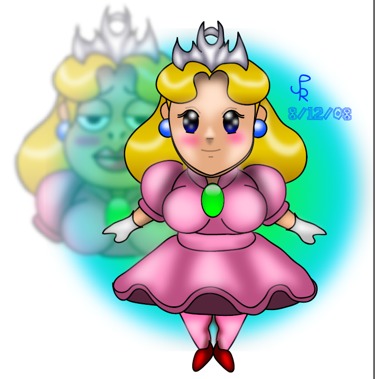 SKILLS AND ATTACKS: She can transport people to different places by wearing masks.

STRENGTHS: She is fought in four different forms.

BACKGROUND: Long ago, a greedy pharaoh signed a deal with a demon. The pharoh would get countless treasures, but only if he starved his people. The people starved to death, and the pharaoh's pyramid sank without any new treasure. The demon continued her devestation until the founder of the Cannoli clan tricked her and sealed her inside the wishstone, which was later split into 5 pieces.
Many years later, Wario heard the wishstone granted wishes, not destruction, and with the help of a wand named Goodstyle, started a quest to put all the pieces together. He was searching for clues in a volcano when a beutiful woman named Tiaramisu helped him. Later, Wario was able to assemble the wishstone. Congratulating him was Tiaramisu... or should I say TERRORMISU.
Terrormisu was the demon sealed in the wishstone, and wished to continue to wreak havoc upon the earth. Wario, who was ticked off that he wasn't going to get some fabulous treasures for completing the wishstone, battled Terrormisu and won. She then fled to the underworld from whence she came... only to return asking Wario and Count Cannoli to help her find some of her things, promising the most beautiful gem of her dimension to the one who got her the most treasures.