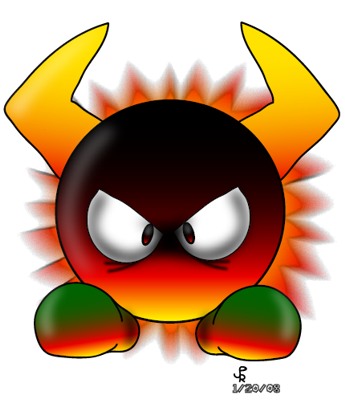 BACKGROUND: Bullies are the main monsters of Lethal Lava Land. They're called Bullies because they're mean, and have bull horns. Bullies are grumpy and don't like anybody (including other Bullies).
If they see anybody, they'll body slam them. They're only weak against very high heat. Bullies reappeared in Mario and Luigi: Partners in Time. These Bullies actually looked like cows and were found in Yoob's belly.

EVOLUTION: In Super Mario 64 Bullies were black, Bob-omb like creatures with angry eyes large yellow horns and green shoes. In Partners in Time, they were bull heads with red shoes and nose rings.