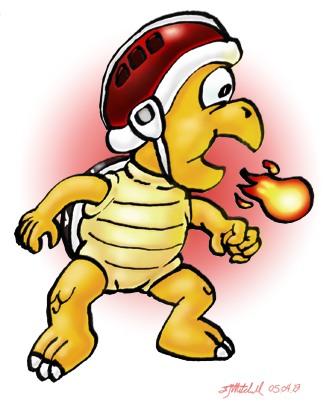 STRENGTHS: They can attack faster than most other enemies.

BACKGROUND: Fire Brothers are one of the most difficult to train of Koopa minions, and is thus they are rarely used. They got their first appearence when Bowser's Koopalings stole the Magic Wands from the Mushroom World Kings: It was more than 10 years before another was trained well enough to fight.
The high-speed fireballs they spit are dangerous and a little difficult to dodge, so watch out for them!

EVOLUTION: Fire Bro first appeared in Super Mario Bros. 3, and was a red Hammer Bro. which spat fire. In Paper Mario 2, he returned with skin the same color as a regular Koopa and with a red shell, looking completely different. It is believed that in the time taken to train a Fire Bro. a severe mutation has occured.