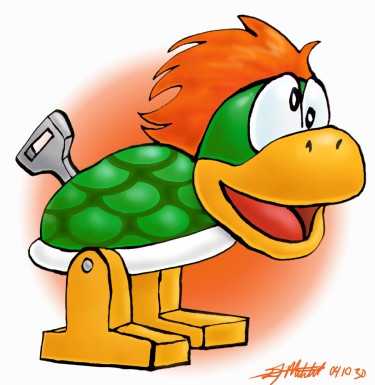 SKILLS AND ATTACKS: Flame breath (only in Mario Party 5)

STRENGTHS: Will get up after being jumped on.

WEAKNESSES: Can be thrown/spin jumped.

BACKGROUND: Seen as traitors in the Koopa Kingdom, Mario used them to pelt the Koopa Clown Car. Mecha Koopas are quite nasty as they will collapse after being jumped on, but will reboot after a few moments, in Mario's hands! Bowser destroyed the traitorous Mecha Koopas and had his best Shy Guys working on a new version (Mecha Koopa 2.0) which was gigantic and could warp to Bowser's location. Bowser used this model as a weapon when he teamed up with Mario to stop Smithy's invasion of the Mushroom World.
Finally, the Koopa Troop developed Mecha Koopa 3.0, which was smaller and faster. These ones had the additional weapon of a Bowser themed flamethrower! However, the main downfall was that the Mecha Koopa 3.0 was so small that it was easily stompable and it was also unable to keep going for longer than a minute. Since then, Bowser hasn't bothered making any more.