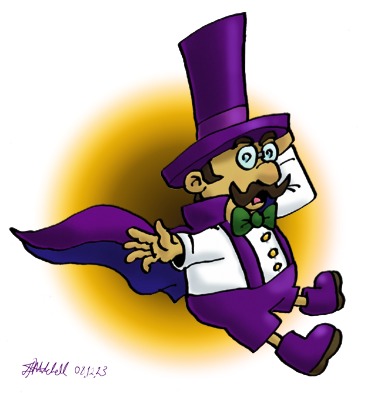 SKILLS AND ATTACKS: He uses robots to beat Wario up, unfortunately, he only gets beat up!

STRENGTHS: Robots, and with the power of Goodstyle, can turn into the Silver Zephyr.

BACKGROUND: Count Cannoli is a thief. A really good one, too. Wario got jealous of him and got into his TV show and stole Goodstyle, the Count's disguise-making wand! Cannoli wanted Goodstyle back, so he used some robots to attack Wario.
Wario defeated Cannoli twice; after he was beaten the second time, he promised Wario a heck of a lot of treasure, in return for Goodstyle. Wario couldn't resist the beautiful treasure! So Goodstyle told them about the Wishstone, the great treasure. Wario thought it was just a useless chunk of sediment, but Cannoli knew of its power. He broke the deal and set off for the Wishstone. Wario was enraged, and set off for the Wishstone too, believing that he could get all the money he wanted with it! But when Wario beat Cannoli to the stone, he was in for a surprise...