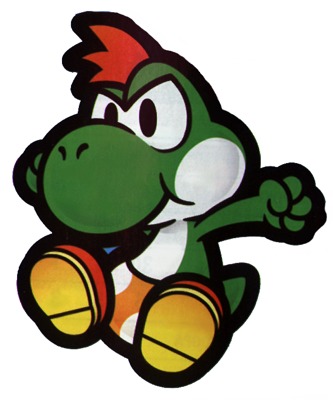 BACKGROUND: Originally intended to be a topping on a hot dog, a Yoshi egg was discovered to have a baby Yoshi inside it. After being rescued by Mario, it joined him at the Glitz Pit. After Mario lost a fight with the Armored Harriers, it hatched! Mario named him, and from then on, it joined Mario on his quest to save Peach. He was also stuck to calling Mario by his stage name, "The Great Gonzoles." After Mario returned to the Mushroom Kingdom, he started to go into the Glitz Pit with his own solo career, under the name "The Great Gonzoles Jr."