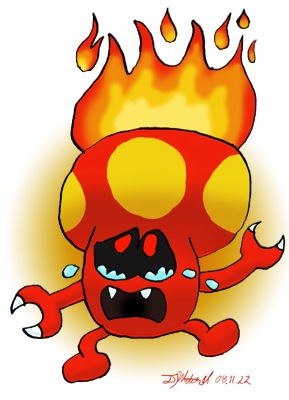 STRENGTHS: They can summon a Shroob UFO in battle for their firework blast.

WEAKNESSES: If you jump on their heads and suffer the damage, they can only use their laser shot attack.

BACKGROUND: Blazing Shroobs are red Shroobs with yellow spots that worked inside Thwomp Caverns during the Shroob invasion of the Mushroom Kingdom. Unlike other Shroobs, Blazing Shroobs' heads are always on fire, until someone jumps on them, but that decreases the number of attacks they can perform.
After a while their heads can light on fire again - maybe Shroobs are highly flammable? When someone gets close to a Blazing Shroob, it will charge toward them and engage in battle.