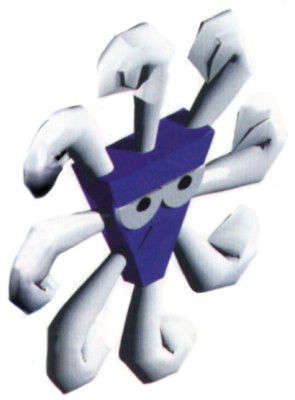 BACKGROUND: Pinwheels are distant relatives of Thwomps. They have the same blue and white colouration, but these monsters are spinning propellors brought to life by a similar spell to the one that enchanted Thwomps. They aren't as common as Thwomps, large groups of them can only be found in Nimbus Land.
Pinwheels can blow their opponents away with incredible gusts of wind. They can't move while they're doing it, though, so they aren't too hard to avoid. They're also fairly weak in battle and they don't like other monsters, so one is usually found alone or perhaps with one other Pinwheel.