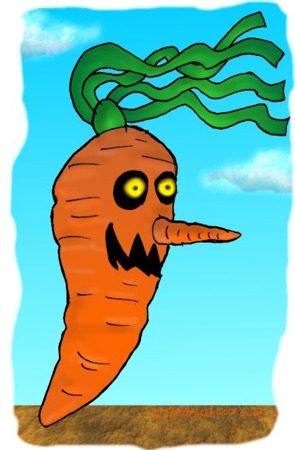 BACKGROUND: Carroboscis is a large carrot with a monstrous face. These creatures are possesed vegetables, which can pose a bit of a threat if not treated with care.
Legend has it that one of the earliest members of the Booster family cast a spell on the land in Booster's pass, where a number of wild plants grew. This spell was intended to bring the vegetables to life, and turn them into playmates and guardians of Booster Tower. Carrobsocis and possibly Artichoker were the supposed results of this incantation. The legend sounds far-fetched, but anyone who knows a bit about the Booster family tree might think twice: they are an eccentric group, to say the least.
At any rate, the Carroboscii are largely wild, but they do seem to be tame around Booster and his minions. They have also never spread beyond Booster pass, a fact which leads some to believe that they are indeed "pets" of the Boosters. On the other hand, some argue that it's a case of the Goomba versus the spore...which came first? It may be that the unusual behaviour of Carroboscii led to the stories of the Booster family possesing these vegetables.