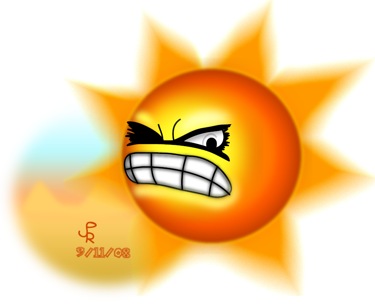 SKILLS AND ATTACKS: They're made out of fire. Anything that touches it would get hurt.

BACKGROUND: Angry Suns are rare Sun like creatures which inhabit the deserts of the Mushroom Kingdom and sometimes the area around Bowser's castle (it is unknown if they actually work with him). Despite having the name "Sun" these creatures are only slightly bigger than Mario or Luigi. These things can move pretty quick.

EVOLUTION: After a long absense since making it's debut in Super Mario Bros. 3, these Suns appeared in the "Desert Hills" track from Mario Kart DS and Mario Kart Wii. They basically shoot Fireballs from their bodies.