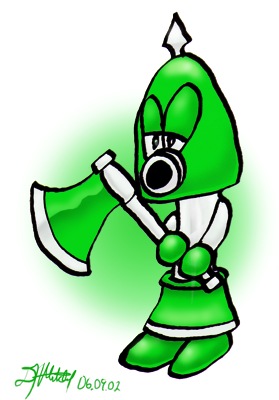 STRENGTHS: Strong against Sleep and Silence.

BACKGROUND: Axem Green is the nerd of the Axem Rangers team. He's very intelligent, but he's a bit of a skinny weakling. He's able to cast moderately powerful spells but he can't take a lot of punishment and his physical attacks are nothing.
Axem Green attempted to steal a star piece from Mario, along with the rest of his team. They were defeated however, and it seems that the entire team was destroyed by Mario. Like the rest of Smithy's robotic creations, many copies of Axem Green could be made, but it's unlikely that any survive in the Mushroom World.