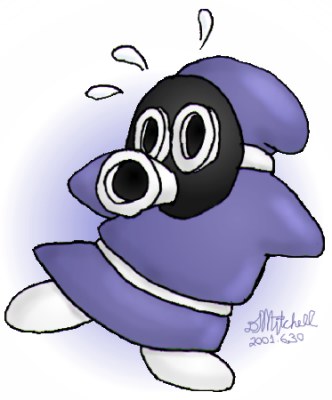 BACKGROUND: The Apprentice (also known as the Snifit Cadet) is a Spookum that is trying to get promoted to the rank of Snifit. He's usually hard at work on the Snifit training course in Booster pass, trying to gain the favour of Booster so he can become Snifit #4.
Unfortunately, the Apprentice ran into a bit of a roadblock when he attempted to move up in the ranks of Snifitdom by taking on Mario. Instead he got beaten, and rumour has it that he was forced to start his training all over again.