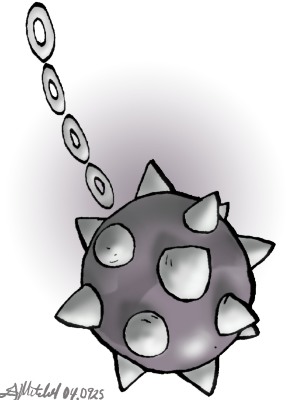 STRENGTHS: They can move through walls.

BACKGROUND: Ball 'N' Chains were first seen in many of the Mario World castles. Because there were some Shy Guys from Yoshi's Island that wielded these weapons, it is my belief that the Shy Guys also invented these (Shy Guys are really intelligent!)

EVOLUTION: Originally Ball 'n' Chains were about the size of two Super Marios, and looked a bit cartoony.
Ball 'n' Chains made a reapparance in New Super Mario Bros. The balls on the Ball 'n' chains are much larger in NSMB, which seems to suggest that the Shy Guys remade them to make them harder to avoid. The chain is also much more visible in this game.