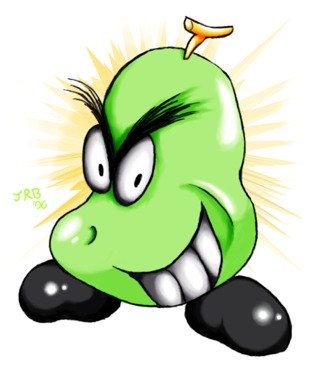 SKILLS AND ATTACKS: Charge, Fake Out.

STRENGTHS: Native to the Beanbean Kingdom.

WEAKNESSES: Green coloration aside, it's just like a Goomba!

BACKGROUND: This Beanbean equivalent of the Mushroom Kingdom's Goomba is nowhere near as intelligent. Whilst they are capable of surviving in pretty much any terrain, (even underwater) their survival tactics are animalistic at best. Whilst they team up with Rexes and Dry Bones in combat, they do not tend to hold any actual loyalty to anyone other then themselves.
Unusually, one of Queen Bean's (in her terrifying, Hulk-like form) attacks seems to involve the usage of Beanies as projectiles. If Mario or Luigi attempt to counter this attack, the beans spat out transform into beanies that attack alongside Queen Bean. Though they are often destroyed by Queen Bean's shock-wave attacks.