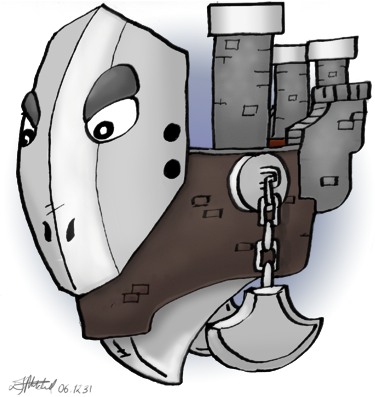 SKILLS AND ATTACKS: Pick up!

STRENGTHS: It's huge and it can transport Smithy's underlings.

WEAKNESSES: It always seems to be running late when Smithy Gang members need it the most.

BACKGROUND: Blade is an axe-shaped personnel transport used by the Smithy Gang. It appears to be capable of flying alone but never seems to pick anyone up on time. Mario and friends were able to corner Yaridovich and the Axem Rangers before Blade was able to pick them up, preventing the Smithy Gang from getting possession of any of the Stars.
In addition to the eyes on it's front, Blade has a large robotic head somewhere in it's hull which can be used to defend against attackers. Destroying the head was enough to cause the entire Blade to fail and crash near Barrel Volcano. Some speculate that Blade may be capable of traveling through outer space.