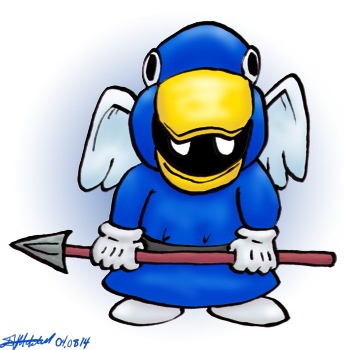 BACKGROUND: Bluebirds are Valentina's elite soldiers. Like Birdies, they're human-like creatures with wings and bird costumes, but they wear blue costumes to signify their advanced rank in Valentina's army.
Bluebirds know a few magic spells and are all-around tougher than Birdies, but they aren't quite as powerful physically, and they're still not the most powerful monsters Valentina had under her control while she was in Nimbus Land. Bluebirds are not a major threat on their own but they always fight in groups, making them a little dangerous.