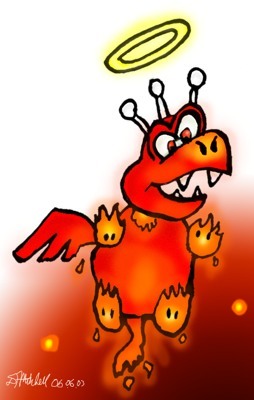 STRENGTHS: Strong against Fire and Sleep.

BACKGROUND: Czar Dragon was an unusual monster, seemingly composed of Fireballs (or Podobos). The creature's exact origins are unknown, it's thought that perhaps the magic of the Star Piece that fell in Barrel Volcano fulfilled the wish of the Fireballs to defend their home from Mario. In fact, this wish was so powerful that it allowed Czar Dragon to be resurrected as Zombone after it had been defeated.
Other theories suggest Smithy had something to do with the creation of the Czar Dragon, but Smithy didn't seem particularly interested in magic, and the monster was not technological.
Unfortunately, since both Czar Dragon and Zombone were destroyed shortly after they first appeared, nothing is known about their habits or abilities. Suffice to say, if anyone could find another Czar Dragon, it would be both a fascinating and incredibly dangerous discovery.