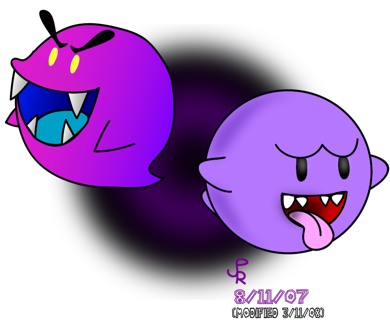 BACKGROUND: Dark Boos were once just regular Boos, but turned evil. They're more frightening than ordinary Boos, so their scare attack hurts more. Not only that, but these spooky specters can take more damage before going down, and they don't seem to fear light as much as ordinary Boos judging by their invasion of Poshley Sanctum.
These dark ghosts invaded Poshley Sanctum at one point. It's thought that they were directed there by Beldam or by their leader, the Dark Atomic Boo. It seems more likely, though, that they were just attracted to the Crystal Star being held there.
Interestingly they also appear in Gritzy Caves. It could be that they died here. These ones stole items from foolish adventurers. Dark Boos seem to hail from the Underwhere, as this is one of the only places to find them in Super Paper Mario. It makes sense since it's the place where the "Game Overed" go.