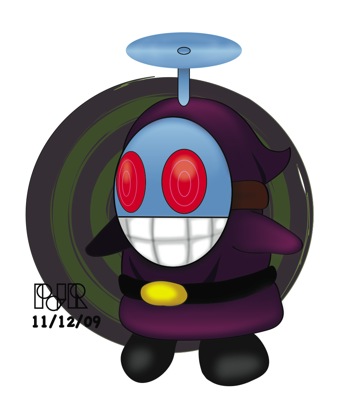 STRENGTHS: Can't be damaged unless inhaled, sometimes hard to time counters against its Jump attacks.

BACKGROUND: When Fawful took over Bowser's Castle, he brainwashed most of Bowser's minions into serving him. Among these minions were Shy Guys, to which Fawul also repainted their masks. When Fawful stole the Dark Star and brought it to Peach's Castle, he used it to power up a few of his minions, as well as himself. Thus, Dark Fawful Guys came into existence.
Dark Fawful Guys will only appear after a certain amount of turns have passed during a battle as Bowser, with a huge Dark Star Bomb on the top screen.