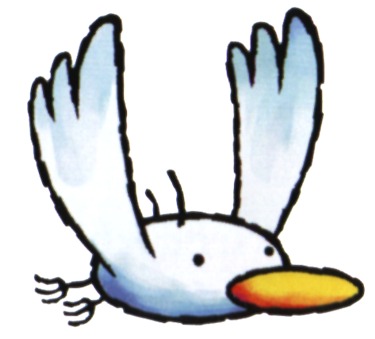 STRENGTHS: They fly very high so it's hard to reach them.

BACKGROUND: Goonies are an abundant species of seagull that live on Yoshi's Island. They aren't really enemies, real enemies (like Shy Guys) hitchhike on Goonies. If the Goonie flies over over a Yoshi, the Shy Guy lets go, therefore falling down on the Yoshi.

EVOLUTION: Goonies first appeared in Yoshi's Island where they look like sketchy seagull creatures that are more head than body.
They returned in Yoshi's Story where they had a slightly more realistic, three-dimensional look, although they still had fat, round bodies that were mostly head.
In Yoshi's Island DS, they go back to a more traditional look.