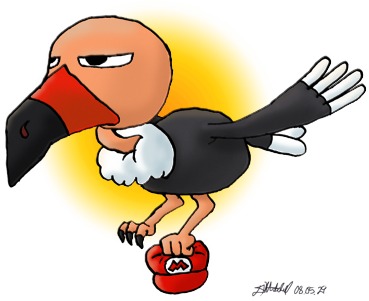 STRENGTHS: He can not be defeated.

BACKGROUND: Klepto is, as his name implies, a kleptomaniac. The big bird can be found flying around Shifting Sands Land, where he holds the first power star of that world. Everytime you see him thereafter, he divebombs you and steals your hat.
Klepto also made some cameo appearances during Mario Party 4 and Mario Party 5.

EVOLUTION: Klepto's general appearance has not changed much. in SM64, he was a large vulture. In MP4, his size increased to nearly three times that of your character. He returned to his regular size in all his later appearances.