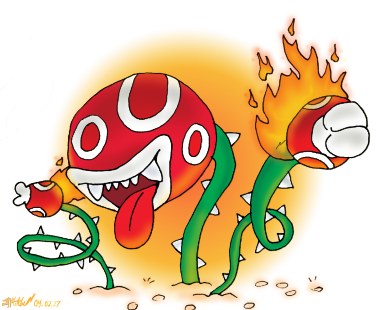 SKILLS AND ATTACKS: Fire, lots of fire...and lava. He can also call Nipper Plants from the ceiling

STRENGTHS: He's resistant to fire attacks and when he's on fire he will damage anyone who

WEAKNESSES: Ice or water attacks and eggs in his boo boo.

BACKGROUND: Naval Piranha was at first just a normal little piranha. But with Kamek's magic he was transformed into a giant piranha with only 1 goal in his mind....destroy Yoshi and capture Mario. When Yoshi defeated the giant plant then he moved to the lush jungles of Lavalava island and settled down there for a while waiting for Bowser's orders.....but Bowser couldn't find him to call upon him again until he got the star rod and found him in the jungle. Bowser gave him a resistance to fire and gave him the Star Spirit to protect and Lavalava volcano as his home base.

EVOLUTION:
When he first appeared in Super Mario World 2 he looked very much the same as he did in Paper Mario, except that in Paper Mario he doesn't have a bandage anymore and he is naturally resistant to fire.