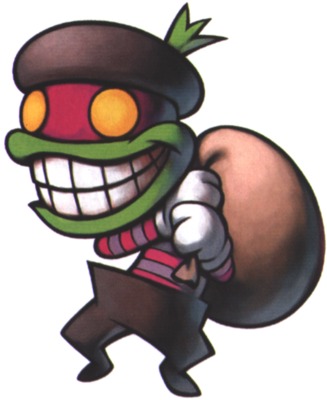 STRENGTHS: His ability to steal.

WEAKNESSES: He's a coward without his rookie.

BACKGROUND: After Bowser was launched from Tolstar's cannon, he lost his memory and met Popple, who convinced Bowser to join him. They tried to steal Chuckola Cola and the Beanstar, and both times failed. Bowser then regained his memory and was separted from Popple. Popple tried to steal a Beanstar piece on his own but was foiled by Mario and Luigi. Later on, Popple finds a new rookie: Birdo! After once again failing to beat the Mario brothers, he was later hired by a Toad in Little Fungitown, cleaning mushrooms and becoming this Toad's Rookie. Popple treats his rookies unkindly, blaming them for all his failures. He is also quite cowardly because if you kill his rookie before you kill him, he runs from battle.