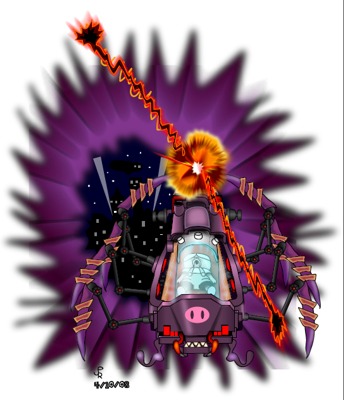 SKILLS AND ATTACKS: Has a lot of weaponry.

STRENGTHS: His attacks are dificult to avoid,

WEAKNESSES: He's a big targes and is easy to get around.

BACKGROUND: Pokey Minch was a normal bully. He was obnoxious and rude, and he lived next to Ness with his parents and brother Picky. One day, and alien named Buzz Buzz foretold the day that the evil alien overlord Giygas would destroy the world. This prophecy of power struck a chord with Pokey and he soon defected to become Giygas' right hand man. Giygas, though, was destroyed by his own power and was nothing but dark energy (as Pokey puts it, "an almighty idiot.")
After Ness and his friends were able to subdue Giygas (thanks to Ness' friend Paula), Pokey left through a time warp with a final message coming in the form of a note from his brother Picky:
"Come and get me, losers! Spankety spankety spankety!"
He eventually reappeared in the Nowhere Islands with his own Private army, the pig masks, and took over. His body was now extremely old, a side effect of time travel. He was nearly defeated by Lucas and his friends, but sealed himself in an invincible capsule first. Unfortunately, the designer of the capsule made it so that no one could get in or out. Pokey was left alone, doomed to be forever isolated from the world. The doorknob on the capsule was missing, though, so it can be assumed that Tabuu had him released to aid him in his plans.

EVOLUTION: In Earthbound (Mother 2), he was a portly young boy with a flat nose and blond bowl cut hair covering his eyes. He wore a white shirt with blue overalls. In Mother 3, He looked the same, but with a hint of facial hair, and his hair had turned white. His Mother3 appearance is the one that appears in brawl.