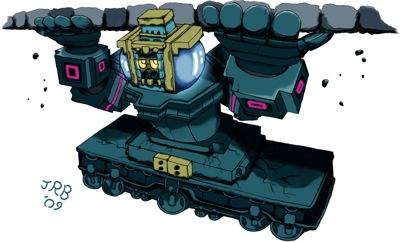 SKILLS AND ATTACKS: SMASH and laser.

STRENGTHS: It's big, mean, and can fire a Wario repellent.

BACKGROUND: Rollandratl is a stone warrior who has been living in the cave for many years. He guards a treasure. He attacked Wario by slamming his head down like a Thwomp and repelling him before Wario could hit his weak spot: the side of his head. Eventually he sprouted lasers and moved his weak spot up to the top of his head, where Wario had to ride the flying blocks to ground pound Rollandratl's head to defeat the giant rock figure. Wario claimed the treasure and went off to the next island.