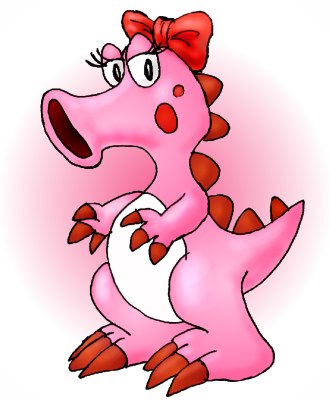 WEAKNESSES: Weak against Jump Attacks, Geno Attacks and their own eggs.

BACKGROUND: Birdos were a normal resident of Subcon. Apparently after Wart invaded, she turned evil and guarded almost every stage. Since then, some Birdos have become peaceful, and one in particular has become close friends with Yoshi.
Others are also wondering how did Birdo reach Mario's World from Sub-con? Some think that Valentina had the power to bring dreams to reality, and Subcon is a world of dreams...however many other monsters seem to have made their way from Sub-con so there may also be some connection between the two worlds.
When a Birdo is growing inside an egg it's called "Shelly", and the eggs that a Birdo spits are sometimes referred to as Eggberts!

EVOLUTION: In Super Mario Bros. 2, Birdo was referred to as a boy that wished he was a girl. Either way, it was still a dinosaur with a huge egg-spitting mouth and a bow on its head. Some came in red and green.
In Super Mario RPG, she looks similar to the Super Mario Bros. 2 version but she's huge and her bow is bigger. She also has a much more 3D look, and she hid inside an egg called "Shelly".
Birdo returned in Mario & Luigi, where she looks much like her Super Mario Bros. 2 counterpart with a bigger bow. Unlike previous Birdos, this one could encase her enemies in eggs and suck people into her nose/mouth.