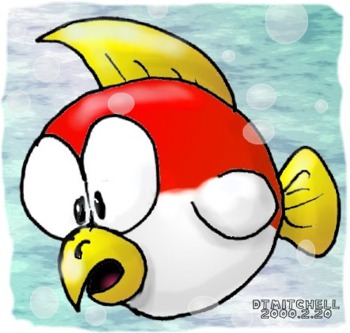 STRENGTHS: They can be quite dangerous when

BACKGROUND: Cheep-cheeps are flying fishies which have plagued Mario since his earliest adventures. They look a little bit like birds, with beaks and wing-like fins. Cheep-cheeps are usually red, but also come in green and sometimes grey varieties.
In general, these creatures seem to be wild, and only get in Mario's way by coincidence. As a matter of fact, Mario has to be careful about running in to them by accident more than being targeted by them as they fly haphazardly through the air. Sometimes they also appear floating in bubbles.
Underwater they aren't quite as dangerous, being fairly slow and predictable, but when teamed up with Bloopers or other hazards, they can be tough.
One last interesting thing to note about these creatures is that they appear in both of the Mario Kart games, as giant balloons that pop and spout confetti all over the winners.

EVOLUTION: Cheep-cheeps have a simple yet confusing evolution. As with so many characters, the trouble begins with Super Mario World.
In Super Mario Brothers and SMB3, Cheep-cheeps were sort of fish-bird hybrids. They had beaks, and could fly, but they mostly swam underwater.
In Super Mario World, there was a character that looked and acted just like the Cheep-cheeps, but it was called "Blurp" (I've included it both here and with the Blurp page. At the same time, Cheep-cheeps became a little tubbier, lost their flying abilities and started wearing goggles.
The explanation? One suggestion is that Cheep-cheeps might be starting to diverge into two seperate species. There were some green, non-flying Cheep-cheeps in SMB3, which would help to support this theory. But a more likely answer is that they were mislabeled.
Super Mario RPG didn't do anything to help solve the problem. Cheep-cheeps are called Gobies in this game, and look slightly fishier. They are possibly a different species, but the similarities are stunning enough to include them as Cheep-cheeps.
Then there's Yoshi's Story, where both Blurps and Cheep-cheeps re-appeared. This time, they look virtually identical, but Blurps are bigger, and fight a bit differently (actually, they're a bit like Big Bertha from SMB3, which doesn't make things any simpler).