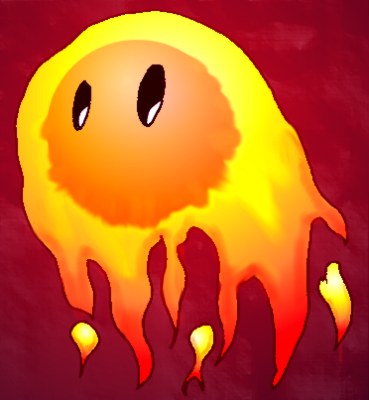 STRENGTHS: Strong against fire and poison in SMRPG. In most other games, they

BACKGROUND: Podobos have gone through a number of names (We're using Pyrospheres from SMRPG for the stats), but they're all quite similar. They live in lava-pits, and jump out once in a while, attacking Mario.
These creatures are used as sentries by Bowser and his children. It seems that wild versions also exist, but wild or not, they are still dangerous.
Being living balls of fire, they are very hard to fight, and in fact you can't defeat them in most of Mario's adventures. Some Yoshis are able to eat them, but they have to spit them back out as fire, themonsters can't be digested.

EVOLUTION: For the first few games in the series, Podobos were simple fireballs that flew out of the lava in Bowser's fortresses - there was barely any sign that they were living creatures.
Starting with Super Mario World, Podobos gained a pair of eyes, and a more brilliant colouring than they had in the original Nintendo games. Interestingly enough, around this time new names started popping up for them as well.
Some might argue that the characters we see in the games after SMB3 aren't Podobos at all, but some advanced or related species but it seems the more likely answer is that these are just nicknames.
Super Mario RPG saw Pyrosphere/Podobo become a deeper orange, and the look carried over to the deadly but beautiful orange glow of the Yoshi's Story Spark Spooks.
Super Princess Peach finally re-introduced the Podobo name (well Podoboo, at least) and the design is pretty similar to Yoshi's Island, with beady black eyes.