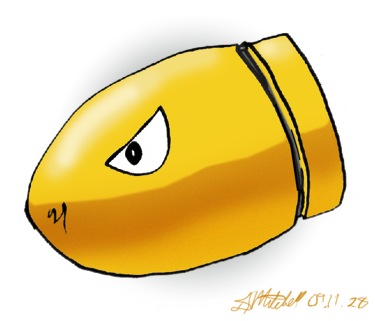 BACKGROUND: The plight of regular Bullet Bills soon became evident to the Koopa Troop, which led them into creating the Bombshell Bill, a missile made of solid gold. These bombs became very popular and were installed first in Bowser's Castle during the events of Paper Mario and later reused by Grodus in an attempt to stop Mario and company from reaching the Shadow Queen in the Palace of Shadow.
Although stronger than the normal Bullet Bills, Bombshell Bills have not been seen since. Maybe they cost too much to build!

EVOLUTION: In the transition from Paper Mario to Paper Mario: The Thousand-Year Door, the Bombshell Bill actual acquired the gold color that they were famous for, previously having simply a black shell with a golden tint.